The Seahorse Hawaii Foundation (SHF) was established in 2006 with the mandate to work toward the conservation of the world’s marine environment with a special emphasis on marine reef communities.

SHF Director Puiata Pulotu has a strong and familiar link to the Kingdom of Tonga and would like very much to extend our work there. Tonga has a unique and precious marine environment that holds valuable resources for the Tongan people and the world. We believe deeply in working toward building a foundation for a long term and sustainable relationship between the people and the marine environment.

Seahorse Hawaii Foundation (SHF) is working to establish a Marine Protected Area (MPA) on and surrounding the island of Fua’amotu. The MPA will be supported and managed by SHF. One of our goals is to assist coastal communities in raising awareness to the importance of marine conservation and the existence of Marine Reserves through educational programs and activities with local schools and communities. This MPA will act as a nursery ground for other island reefs in Tonga. 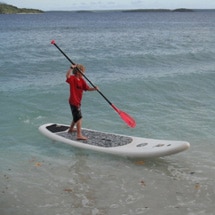 The Junior Seahorse Ambassadors will be sharing the message of marine stewardship with 12 children from the near by villages of Tavarua, Fiji from May 16-24th, 2014, at Tavarua Island Resort. Through surfing, snorkeling, and ocean games combined with the release of seahorses, the creation of coral and giant clam gardens, and the sharing of knowledge from their elders, our hope is that these Fijian and Hawaii children will become inspired to become marine stewards of their local reef and reefs around the world. Click here to learn more »

We truly believe that the implementation of a MPA on the island of Fua’amotu and the work of the foundation facilities will bring tremendous benefit to the Tongan people. It will address the need to replenish the valuable marine stocks for sustainable harvest, it will bring alternative tourism activities for the visitors both in high and low seasons and it will bring awareness and education to the people so that the people will have the knowledge and tool to safe guard long-term sustainable use of the marine environment.

This Marine Reserves would be a “no take” areas will serve as nursery grounds to the surrounding reefs and will act as a living demonstration of a pristine marine environment and as fieldwork stations. The island of Fua’amotu is our first choice because of its location and its’ pristine condition. Since the reefs surrounding this island are up current to the majority of the islands in Vava u’ this island is the nursery ground and seed bank for the other islands in Vava u’.

Protecting the reefs in this area is critical to creating a sustainable fishery for the local island communities, to help create a sustainable export of sea cucumbers, and to preserve and protect these pristine reefs for the highly profitable eco-tourism industry. We hope to expand the number of MPA’s to include other strategically positioned islands throughout the Tongan Islands.

Furthermore, we will establish marine laboratories and a field station on Fua’amotu. These facilities will serve as classrooms, with a guided interpretation center for the visitors that come to the reserve. We plan to reproduce critical and interesting species of animals and plants for the purpose of studies and re-stocking such as the native Tridacna (Giant Clam), Sea Cucumber and Sea Horse. The re-stocking program will take place mainly in the Foundation’s marine reserves but stock can also be made available for other organizations or communities to re-stock their own coastal area. Many of our conservation activities will take place with in the reserve and special education program will be developed by the foundation for the visitors that will combine reef conservation education, hands-on participation in marine conservation programs and fun. These programs will aim to serve both the locals and the tourists.

The foundation will also serve as a knowledge resource base for any special science and culture with a field station on the marine reserve and a marine educational and awareness programs and activities. In year two we will create an Interpretation Center in Neiafu.